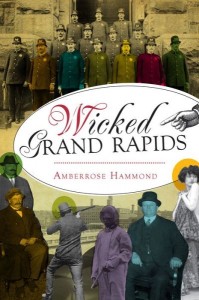 Investigate the citizens of Grand Rapids, even those above suspicion, with author and local history enthusiast Amberrose Hammond as she uncovers a seedy cast of characters from the city’s past. Meet career criminals like Clem Blood, who tore off all his clothes during sentencing, only to be presented with a new suit at public expense. Open a love letter from Grand Rapids’ own Lonely Hearts killer, who lured his victims by direct mail. Unseal the habeas corpus proceedings for the gruesome details of what the Grand Rapids Press called “the most cold-blooded crime in the history of the city.” Stay out of the shadows, keep your doors locked and enjoy delving into the wicked side of the Furniture City. 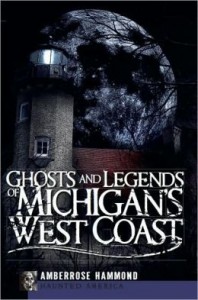 Western Michigan is home to some of the state’s most picturesque places- and also some of its most chilling tales. Ghost story researcher and enthusiast Amberrose Hammond exposes the mysterious and spirit-ridden world of many beloved Michigan destinations as she skillfully weaves narratives of a world unseen by most. From the lingering spirit forever working in the Grand Theatre and the band of melon-headed children prowling the Saugatuck State Park to the lights of the Lake Forest Cemetery staircase waiting to reveal one’s place in the afterlife, these tales are sure to give pause to anyone daring enough to experience these hauntingly beautiful spots…after dark. 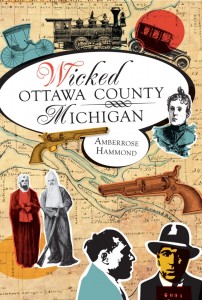 Prepare for a harrowing ride into the seedy side of Ottawa County history as author Amberrose Hammond unearths morbid tales of sin, scandal, and crime. The lovers you find here become enemies, and the jilted, jealous and mistreated favor weaponry to verbal resolution. Ku Klux Klan members don white gowns and leave fiery crosses blazing against the backdrop of night. In this Ottawa County, Eddie Bentz, Baby Face Nelson and a crew of thugs are spraying machine-gun fire outside the People’s Savings Bank in Grand Haven, arguments end in miserable fashion and the missing often turn up without the capacity to out their wrongdoers.